Ministry of Power has just announced Ujjwal Discom Assurance Yojana (UDAY) 2.0 is under making. Like its predecessor, it is once again aimed at turning around operational & financial performance of distribution utilities in India. In film industry sequels to a hit movie is a common phenomenon, however their success again is depended on the script. It is early to say whether UDAY-I is a blockbuster or not (in terms of achieving its objective) but now UDAY II is on the floors. In this blog, I argue rather than providing ambitious targets in terms of tariff hike, in next five years Govt should focus on increasing quality & reliability of power. Once customers are accustomed to good quality power supply, they may not hesitate in paying actual tariffs

UDAY-I was launched by the Ministry of Power, Govt. of India on November 20, 2015, amidst much fanfare and hope that it will do what no other scheme could achieve i.e. bring about operational and financial turnaround in the State-owned Distribution Companies (DISCOMs). It was a tripartite agreement between the Central Govt. of India, State Govt. and State DISCOM whereby the respective state governments would take over 75% of the debt of the DISCOM’s in lieu of certain achievements to be made by the utilities. The two important achievements to be made by the end of FY 2018-19 were, a) reduction inAggregate Technical & Commercial loss (AT&C)to 15% and
b) reduction in gap between Average cost of supply (ACS) and Aggregate Revenue Required (ARR) to zero. 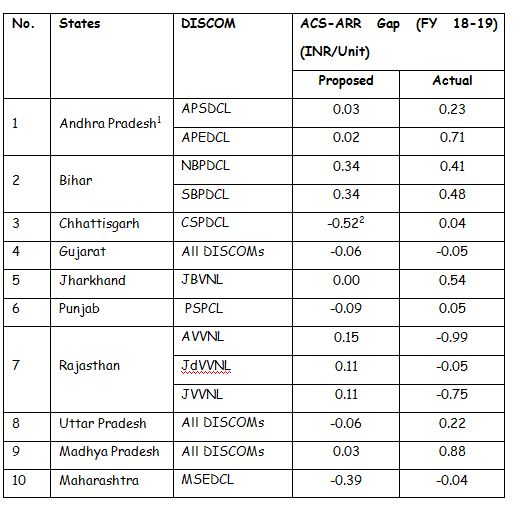 [1] States like AP, Bihar & Rajasthan have signed MoU for each of their DISCOMs
[2] Negative indicates recovery from tariff would be more than the cost incurred

The above table shows data for ten states from UDAY portal (www.uday.gov.in). Only three states out of ten have managed to ensure that the gap between ACS and ARR is zero. In fact, in these three states gap is negative indicating DISCOMs revenue are higher than the cost. However, one should keep in mind that the number in ‘Actual’ column for FY 2018-19 indicate tariff determined based on certain projections (like sales and power purchase cost etc.) andfinals results would only be found out while truing-up (reconciliation) exercise for FY 2018-19 is taken up (should be done while determining tariff for FY 2020-21).
Seven out of ten states not meeting their target of reducing ACS-ARR gap should not be surprising considering tariff hike is still a political matter in India.As a thumb rule no tariff increase takes place in the states in the year of elections, for example, even though Madhya Pradesh and Chhattisgarh agreed to undertake tariff increase of 3% and 5% respectively in FY 2018-19, no increase happened in Madhya Pradesh and tariff was reduced by 3% in Chhattisgarhin the same year as elections were due.
Credit must be given to UDAY for trying to solve legacy problems through mixture of competitive federalism and state support (75% of DISCOM debts were taken over by respective State Govts.), however going forward it must also be pragmatic about politics around power tariff. Setting targets like reduction of AT&C losses to 15% in next five years is unwarranted asstates like Madhya Pradesh and Jharkhand have AT&C losses higher than 30%. Reducing it by half would require a massive capital investment (along with regular expenses such as O&M, employees etc,), which in turn would require tariff increase to a quantum which would not be politically feasible. On the other hand, not allowing such tariff increase would again create unmanageable liabilities in the commercial book of DISCOMs thereby maintaining the vicious cycle which it is trying to break from.
The popular Sharp magazine in one of its articles (dated 27 May, 2015) had given three rules for making movie sequels. First rule is ‘Don’t take your time’, second rule is ‘The same, only different’ and the third rule is ‘Dare to dream’. In all probability UDAY 2.0 would fulfil first and second rule, the challenge would be to fulfil the third rule. Can our policymakers dare to think of something which would ensure that in medium to long term, DISCOMs actually undergo financial and operational turn around?
One of the daring risks to take could be to follow what companies like Amazon or Flipkart do i.e. charge consumers less than what is required but at the same time provide high quality service so that when in near future prices are hiked consumers may not think twice in paying as they are satisfied with the services. This may not be the apt example in totality because these companies face competition pressures whereas the DISCOMs don’t since they are owned by the state governments. However, an analogy can be drawn from this i.e.keeping in mind that tariff increase beyond a certain limit is not politically feasible, UDAY 2.0 can focus towards increasing power reliability and quality and limit tariff increase to say 3-5% (so that consumers do not acquire the habit of not having tariff increase). Once consumers have enough confidence on government service delivery, they may not mind paying the ‘just tariff’. For example, residential consumers in Mumbai pay one of the highest tariffs in the country. Though there is a discontent post increase, yet they pay because power reliability and quality in Mumbai is the best in the country and consumers don’t face power cuts or have to buy power inverters. Further, improved service delivery would also bring efficiency ensuring reasonable tariff increase (Rajasthan DISCOMs in their FY 2018-19 tariff petition did not propose tariff increase and sought to increase revenue through cutting losses).
This is just one of the many ideas UDAY 2.0 can dare to dream of. The challenge is can they dare to dream of? Numerous bailout packages have been issued to DISCOMs in the past and UDAY 2.0 certainly won’t be the last. It is time to be pragmatic and understand there would be UDAY 3.0 or 4.0, however, it is important that each sequel builds onto the other hoping it is no more than a trilogy or a quartet.