The phrase “Idea of India” was first used by Rabindranath Tagore in a letter to C. F Andrews in 1921, writing that “the idea of India is against the intense consciousness of the separateness of one’s own people from others, which inevitably leads to ceaseless conflicts”. He was talking about India’s relation with the world and her role in helping individuals attain salvation. Taking off from that theme, the first India Ideas Conclave held at Goa from December 19-21 in collaboration with the state government, was the first step towards creating the intellectual infrastructure for thinkers to engage on important public policy issues and create space for an alternative narrative of the India story.

The India Ideas Conclave identified Shri Deen Dayal Upadhaya’s philosophy of integral human development as the key theme. The Conclave held a series of dynamic panel discussions and seminars on various sub-themes, punctuated with keynote lectures by thought leaders from around the world. The event brought together 70 thinkers, ministers and politicians from across the world, to address a select group of over 400 participantsinclude eminent academics, global CEOs, renowned scientists, technologists, senior political thinkers and practitioners and media luminaries. Over two days, there was a free flow of intellectual discussion on economics, governance, ideas of development, spirituality and dialogue between civilizations.

One of the most significantpanel discussions was moderated by Shri Suresh Prabhu and saw four leading economic experts- Shri Arvind Panagriya,Lord Meghnad Desai, Shri Subramanian Swamy and Shri Vallabh Bhansali – discuss the topic “Reforms for the Welfare of the Last Man”. Suggestions ranged from using Thorium to generate nuclear power to creating a regulatory environment that encourages start-ups in India. The discussion on nature of economic reforms was later continued in a panel headed by Shri Jayant Sinha on innovation and entrepreneurship in which the participants highlighted the need to drastically improve the ease of doing business in India to ensure the success of Honourable Prime Minister Shri Narendra Modi’s Make in India campaign.

Another session on energy security that included Shri Piyush Goyal and Shri Sumant Sinha (Founder Chairman and CEO of ReNew Power Ventures Pvt. Ltd) ideated on the reforms needed for the growth of power sector and the role of non-renewable sources of energy especially solar power in providing energy security for India. Panel discussions on “Gender Imperative” and “New Politics and New Media” completed the set of debates analysing domestic issues facing contemporary India. Both the panels concluded that the general elections of 2014 had demolished several long-standing assumptions about Indian society and polity and provided a unique opportunity to reshape the contours of the debate on feminism in India and the role of media in a democracy.

Apart from economic reforms needed for material prosperity of the country, the other major idea discussed in the conference was the central importance of our civilizational heritage in restoring the spiritual well-being of the nation. In a session titled “From the Past to the Present & Future”, Shri Amish Tripathi debunked the Aryan Invasion theory and Acharya David Frawley suggested the creation of a new order of thinkers for the modern world in who would use the tools of technology for a higher idealism and self-transcendence.

Similar panel discussions were organised on the topics “Where East Meets West” and “Learning to Lead” in which Professor Dinesh Singh spoke about the high quality of mathematics in ancient India. The session “Religion- Tolerance and Terror’ saw a frank discussion how terrorism is perceived around the world. In another plenary on “Culture & Nation”, Dr. Lokesh Chandra (President of Indian Council for Cultural Relations) emphasised the idea that culture is core and civilization is shell.

The conference was a unique platform where the country’s leading minds came together to brainstorm an alternative “Idea of India”which synthesized useful suggestions from all sources- India’s ancient past, our neighbours, international best practises in human development, intellectuals, domain expertsand our spiritual gurus- to create a uniquely Indian worldview and roadmap for the country’s development. This conclave was just the first edition of what promises to be an annual event to create a credible and vibrant ecosystem for debate on India’s national well-being.

For more photos of the India Ideas Conclave 2014, please use the following link: 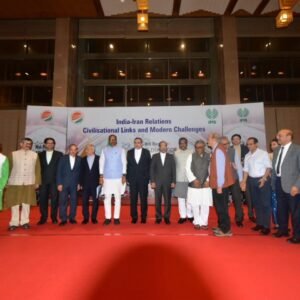 3rd Round of IF-IPIS Bilateral Discussions