An international conference, jointly organised by India Foundation and National Institute of Mental Health & Neurosciences (NIMHANS) in collaboration with Federation of Karnataka Chambers of Commerce and Industry (FKCCI) on, “Exploring Consciousness: Non-Duality to Non-Locality Man – Machine Debate” took place on September 22-24, 2022 at NIMHANS Convention Centre, Bengaluru. The conference was held over three days with presentations and addresses by top scholars, scientists and academicians from various fields. 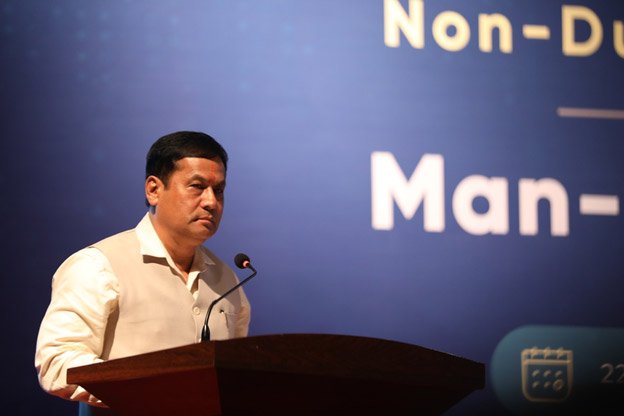 The Chief Guest, Shri Sarbananda Sonowal, in his address, highlighted the importance of nature and how it reflects beauty, support and every quality of human being. He highlighted the important steps taken by the ministry of AYUSH in promoting a holistic approach to mental health and alternative medicine. He also spoke of India’s achievement of becoming a global leader in the sector of traditional medicine. Using this example, he urged the young people of the country to have more interdisciplinary discussions, study various topics and fields and implement learnings so made. Here, he made mention of the same way NIMHANS had worked on the three systems of Allopathy, Yoga and Ayurveda, to develop a working relationship between these fields, which in turn led to a greater understanding of all three. Such learnings, he said, could make India the leading power in other fields such as artificial intelligence (AI).

Dr. Prathima Murthy spoke of the significance of having the conference in NIMHANS as it has a history of having a holistic approach to health and also exploring the mind from states of consciousness to the working of the brain when faced with a disease to the body. When it comes to looking within the human mind and human experiences, there is still a lot we need to understand, she said. The hard problem of consciousness is the question, how does neural activity give rise to experience? Philosophers and neuroscientists have been wrestling with this question for hundreds of years. As technology advances, more questions about the possibility of machines gaining consciousness and the ethical dilemmas surrounding these questions are being discussed. This conference could shed light on some of the related knowledge systems we have. Thereafter, Dr. CA. I.S. Prasad delivered the vote of thanks. Dr. Brophy began the discussion by talking about how six years ago a computer defeated a champion of Go in a much publicised tournament. Go is a game that is both simpler and more complicated than chess; it requires intuition and intelligence to be played well. He also spoke about how, in the 80s and 90s the foundations of science, classical physics was causally closed so there couldn’t be any connection between the physical body and the consciousness body that the Vedic ontology talked about. However, in the 1920’s, quantum physics was discovered to be the foundation of modern science which created a causal opening in the structure of the physical universe such that there is a possibility that the consciousness bodies could interact with the physical body and brain. This seems like the way of unifying the Vedic view with the modern scientific view of the physical universe. Professor Kanchi Gopinath spoke of Indian philosophies and ancient Indian technologies in the scriptures in modern context. He drew parallels between the concepts of gyanendriyas, karmendriyas and input-output devices in computer science, chitta and storage, manas and the controller, ahamkara and thread of execution in computers and lastly, buddhi and integrative facility. When you look at gyanendriyas or input models (sense, touch etc), this domain is being handled quite well by current work on deep learning. According to him, anything that requires input, processing and an output, can be beautifully handled by AI. He drew an intriguing analogy between the potential abilities of computers and Bharata’s analysis of the psychological connection between rasas and bhavas in the Natyashastra. Dr Gopinath then explained the many limitations we face when it comes to the potential of AI and modern technology. Dr. Mathjis Cornelissen spoke of Sri Aurobindo’s methods and studies of exploring the structure of reality via meditation, following which Prof. Oscar Pujol, put forward the true problem of consciousness, similar to what Dr. Prathima Murthy had mentioned and how Yogasutra’s concepts of mind and consciousness can be used in modern philosophy of mind as well as the merits of Patanjali’s descriptions that avoid the pitfalls and idealism by leaving room for a non-material entity called the purusha. Finally, Prof. Shugan Jain discussed the Jain Philosophy’s explanation of consciousness and souls as well as the types of existents. Prof. Georg Northoff’s presentation focused on the Tempo-Spatial theory of consciousness and possibilities implicated by it. Prof. Tobi Zausner, spoke of the multiple states of consciousness, the meaning of creative trance and the scientific findings related to it. Prof. Narayanan Srinivasan discussed the recent results on the effect of load and scope of attention on different aspects of perceived time as well as recent findings on the effects of meditation training on visual and temporal experience. Lastly, Dr. John J. Kineman spoke of the consequences of the rise of the post-truth age, the role of Vedic Principles in modern context and models for understanding consciousness. Swami Narasimhananda presented an overview of the Advaita Vedanta philosophy system and the possibilities surrounding this system. Prof. Steven Laureys sent a video presentation reviewing some neurological facts on consciousness and impaired consciousness as well as the fascinating observations and preliminary hypotheses based on his team’s 20 years research on consciousness during near-death experiences. Dr. Rosalind Pearmain discussed three elements in unfolding of the experiences that were meaningful to the participants of a phenomenological inquiry into the lived experience of meditation undertaken with eleven meditators practicing heartfulness meditation. Swami Sarvapriyananda gave a five-step road-map from the current conundrum of consciousness studies to the Advaita Vedanta view to provide insights into the radical nature of the Advaitic solution. Lastly, Prof. Aviva Berkovich Ohana had sent a video presentation introducing simple conceptualisation of dual sense of self, the minimal and the narrative modes followed by a review of neuro-scientific findings pertaining to the meditation-related alterations in the neural mechanisms supporting the narrative self, which together provide support to the notion that long-term practitioners demonstrate less reliance on narrative-self and the related processing. Dr. Antonino Raffone spoke of a series of neuroscientific and phenomenological studies conducted by his team with the outstanding participation of Theravada Buddhist monks and their findings along with the implication. Dr. Thomas Brophy discussed an approach to develop a meta-theory that can sustain the existence of consciousness agency, called “Actual-Theory” and situated the recent revivals of property dualism (such as by David Chalmers) within the Actual Theory paradigm. Prof. Sanjeev Jain brought a psychiatric perspective to the discussion explaining the importance of studying psychiatric syndromes to understand how consciousness operates using various studies and findings in his field of study. Lastly, Dr. Paul John Werbos explained the role of noosephere species theory as a new window to see life and cosmos and understand physics beyond Quantum electrodynamics. Prof. Dean Radin discussed two experiments exploring the possibility of a global collective consciousness and what we know related to the concept. Prof. Harald Atmanspracher discussed dual-aspect monism and a systematic and coherent reconstruction of some corresponding speculations in the 20th century that yield a taxonomy of mind-body correlations that can be considered as a key prediction of the approach. Prof. Sisir Roy discussed Advaita Vedanta and Kasmira Saivaism in their relevance to quantum physical concepts. Lastly, Prof. Alex Hankey discussed consciousness, instability and quantum theory leading to a conclusion that consciousness is the Source of Space-Time-Matter. Dr. S. R. Bhatt spoke of a holistic approach to reality and the use of inner experience that is immediate and intimately realised. Prof. Stephan Schwartz presented an Anthropological assessment of religions and spiritual practices stripped of their sectarian dogmas. Geshe Ngawang Norbu discussed the mind and its mental factors with Buddhist scriptures as a basis as well as the six consciousnesses and 51 mental factors according to the Higher Abhidharma texts. The chair of the valedictory event was Dr. K Radhakrishnan, Ex Chair ISRO. He spoke about his time in the deep space ground center where he and his colleagues were trying to figure out the meanings of the images of Mars that they had received from the Mangalyaan probe. This moment was possible because the minds of thousands of people got together to have that exciting mission and how in all the fields of study, be it consciousness and AI or any other project, minds need to come together with a common purpose and a mission to bring progress.

Following his speech, Prof. Bindu M Kutty, Professor Department of Neurophysiology, In charge Professor and Coordinator of NIMHANS Centre for Consciousness Studies, gave a special address in which she discussed how the research team at NIMHANS demonstrated the brain dynamics of meditation practices at different states of consciousness and the effects after meditation.

Dr. P.N. Ravindra, Associate Professor Department of Neurophysiology Center for Consciousness Studies NIMHANS, summarised the entire conference and its outcomes in his concluding remarks which were followed by a vote of thanks by Ms. Hamsa Devineni, Visiting Fellow, India Foundation.